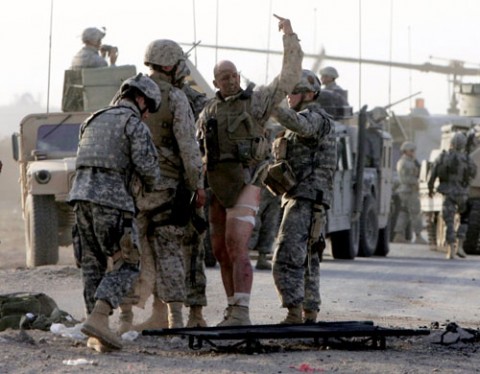 The front page of the Omaha World-Herald on September 24, 2005, featured the above photograph of Marine Gunnery Sgt. Michael Burghardt being attended to by two Marines from Nebraska during a tour in Iraq. The story in the World-Herald reported on Burghardt’s injury by an improvised explosive device near Ramadi, and the photograph captured his response to his attackers. Some issues to consider here are whether or not the photograph was necessary and whether or not the photograph was obscene. Given the angle at which the photograph was taken, it’s not immediately clear that Burghardt was hoisting his middle finger (unlike the Richard Allen Davis case, in which there was no doubt whatsoever) and so it might be hard to claim that the photo was obscene. Was the photograph necessary? Some would say yes––the photo effectively captures the event and conveys more than words could ever tell. On the other hand, some would say no––the photograph, particularly as it was used on the front page––was an unabashed attempt to sell more newspapers; moreover, some would say also that if the story was about Nebraskans serving in Iraq, then the story should have focused on that rather than on Burghardt’s injury.

What do you think?