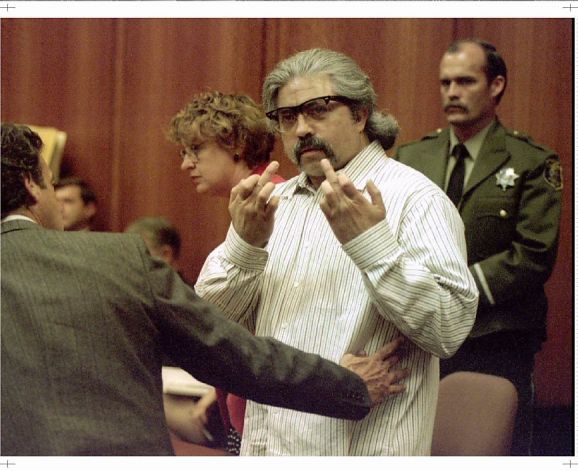 Sometimes photographs used in news stories are criticized because they do a better job of shocking readers than they do of informing them. The photo above, taken in 1996, is an excellent example. Shortly after being convicted by a Northern California jury of murdering 12-year-old Polly Klaas, Richard Allen Davis stood up, turned to press-pool photographers and held up both of his middle fingers. The San Jose Mercury News chose to run the photograph along with a “Dear Reader” box soliciting reader responses to the photograph and explaining why the editors chose to run it. Because Davis’s trial was well publicized, most people already knew of his courtroom conduct––he regularly demonstrated a complete lack of remorse, and behaved contemptibly. Thus, many editors asserted that the Mercury News merely wanted to shock its readers and sell newspapers.

The photo below might be similarly criticized for a seeming desire to profit from shocking the public. In January 1987, five days before he was to be sentenced for conspiracy, mail fraud, and racketeering, Pennsylvania State Treasurer R.Budd Dwyer held a news conference during which he read a 25-minute manifesto criticizing fellow politicians and the media. At the conclusion of the conference he pulled a .357 magnum revolver from an envelope, put the barrel in his mouth and pulled the trigger. Still and video cameras recorded every instant. On the noon news that day in Philadelphia, a number of broadcast news stations chose to run footage of Dwyer, cutting the videos seconds before Dwyer fired. Some newspapers also ran photos. The Daily Times of Philadelphia published three photos on page one, including one of Dwyer with the revolver in his mouth and one taken a split second after he pulled the trigger, with an apparent explosion of blood behind his head. If you were a Pennsylvania newspaper editor or television news director, what would you have done? November 27, 2013: The front page of today’s The New York Times featured a photograph of a woman bearing her scarred breast for a story on the high incidence of breast cancer among Israeli women (see “NYT Powerful Front Page: Was it Necessary?”). This case offers a different perspective on the question of whether photographs shock or inform.

2 thoughts on “DOES IT SHOCK OR INFORM?”