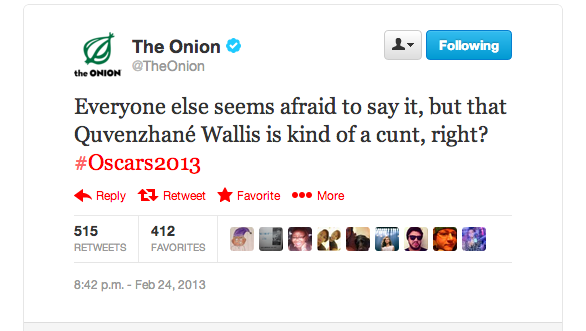 Last night during the Academy Awards the satirical newspaper The Onion––apparently feeling the need for some edgy satire––wrote the above about nine-year-old actress Quvenzhane Wallis on its Twitter feed. Wallis had been nominated for best supporting actress in “Beasts of the Southern Wild.” The paper immediately deleted the tweet and issued an apology, saying “No person should be subjected to such a senseless, humorless comment masquerading as satire.”

In his piece on the incident, Edward Champion suggested that the possible motivation for using the word might have stemmed from comedian George Carlin’s famous routine on using swear words in public. However, Champion asserted that “In less than 140 characters, The Onion betrayed and violated 25 years of satirical good will.” Moreover, he said, “unless you are a sociopath, there is nothing funny about calling a child a ‘cunt’––especially when there isn’t any additional context to the purported ‘joke.’”

Champion reported that The Onion’s Twitter feed has 4.7 million followers. So here’s the obvious question: When does satire cross that delicate line between being edgy and funny and being insensitive and hurtful?