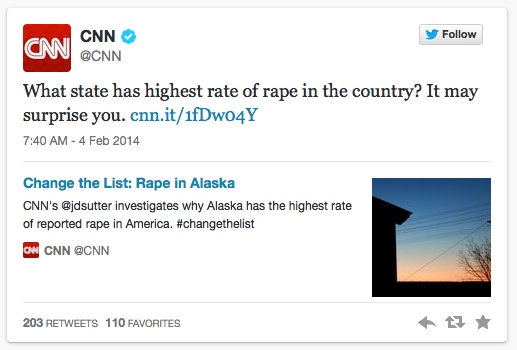 In an apparent effort to shore up their sagging ratings, CNN has taken to posting Upworthy-style tweets. If you’re not familiar with it, Upworthy has been attracting attention for distributing popular, sharable content. Started by MoveOn founder Eli Pariser in March 2012, the site recorded more than 10 million monthly unique visitors in little over a year’s time. Given this kind of success, it’s no wonder that others are looking to imitate it. One news organization that seems to be doing it is CNN. In the tweet above, CNN—according to the website Mediaite—“[tweeted] out a flippant question about sexual assault in the style of local news reports (‘Tonight at 10, the murder story that will shock you’).” Then there was a tweet from 12 days ago (see below) that covered the murder of a little girl.

Is there anything wrong with this way of reporting serious news? After all, these tweets aren’t about mundane topics—they’re about rape and murder. Is this just about getting page views? What does this say about the state of journalism today—that to get people to pay attention, news has to be packaged in tabloid-sized pieces? What exactly is the moral problem here?

One thought on “Why Do This? The reason will shock you!”