In July 2016, a Minnesota woman named Diamond Reynolds went live on Facebook right after her fiancé, Philando Castile, was shot in the arm by police in his car during a traffic stop. According to Reynolds, Castile was reaching for his wallet and drivers license when the officer shot. The couple’s four-year-old daughter was in the backseat during the entire ordeal. The video shows Castile bleeding through his white t-shirt and a visibly upset four-year old child. Castile later died due to the wounds. 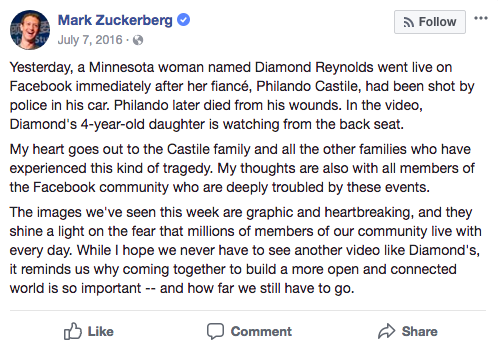 Facebook’s standards do not ban violence because as one spokesperson said, “In many instances, when people share this type of content, they are doing so to condemn violence or raise awareness about it.”

In today’s social media digital age, this is one of the newest and most popular forms of citizen journalism. According to Reynolds, she chose to log onto Facebook that evening so that she could get out the truth. This video alone was streamed 3.2 million times less than 24 hours later. 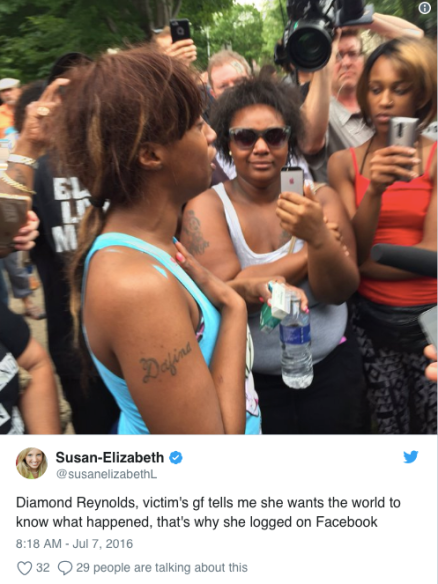 Many users were torn whether or not this post raised awareness or should’ve been streamed in the first place. Many people also pointed out that since the stream began after the police had shot Castile, it caused more problems due to the fact users were unable to actually see what caused the police officer to feel the need to act the way he did.

The post created a lot of backlash around police officers and their protocol as well as brings up a lot of commentary surrounding racism and law enforcement. A couple days later, protestors in Dallas used Facebook Live to stream police officers being ambushed by a terrorist. Does this raise awareness? Or does it promote violence?

Should Facebook have kept the video down that Reynolds took? What is the difference between police officers being ambushed by terrorists and Castile’s distraught daughter being streamed while her father died? What types of policies does Facebook need to implement to ensure that the content posted on their platform actually does raise awareness? How can Facebook control content when there is a “live” option to begin with?