Retail giant Bloomingdale’s 2015 Christmas Catalog seemed to miss the mark with an ad which caused mass outrage for its allusions to date rape. The picture, shown below, was intended to give a lighthearted approach to a holiday party but the text “Spike your best friend’s eggnog when they’re not looking” created a hullabaloo online and in person at several Bloomingdale’s stores.

The backlash online was swift and unyielding: 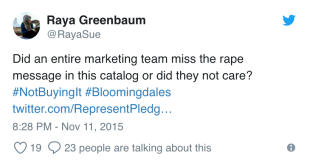 In response to the backlash, Bloomingdale’s released a short statement apologizing for its oversight.

Many people called for Bloomingdale’s to donate a large sum to the victims of date rape and other forms of sexual violence to which Bloomingdale’s did not respond.

Several questions come into play when looking at a case such as this. Was the public simply grasping for straws when getting upset at the ad? After all, it is unlikely that Bloomingdale’s actively advertises a date rape culture. Does this ad take on a new meaning, 2 and a half years later, in the face of the MeToo movement? Was Bloomingdale’s response adequate? If not what could they have done instead?