Today Apple released an ad for its Apple Watch 4 promoting the “freedom of cellular.” In the ad a woman starts off running, becomes airborne and gyrates in midair, eventually falling face-first into a lake. The images of her tumbling in the air seem to recall famous images of people jumping from the World Trade Center on 9/11. One still from the ad (above) more clearly shows her falling head down, which perhaps is more evocative of the 9/11 images and memories of the event itself.

For some, this may well be a trigger––once again bringing to mind the awful site of seeing people plunging to their deaths (below) to escape terrible fires after terrorists flew two airliners into the twin towers of the World Trade Center on September 11, 2001. 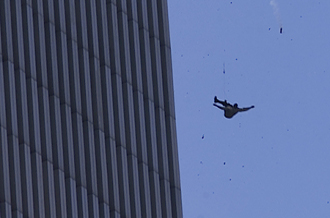 One reader on the website macrumors.com likened it to someone committing suicide:

“Woman has a midlife crisis and falls into a deep depression.
She tries exercise (and consumerism) to help with it but is overwhelmed by feelings of fear and lack of control.
She decides to attempt suicide by drowning and for a brief time feels she has regained control.
She fails in her attempt and continues to shut out her friends who call to help her.
Weird ad.”

See the ad for yourself: https://youtu.be/4tfa-n1iSdo.

Does it evoke memories of 9/11 or does it seem to portray suicide?

First it was Gucci who, amidst outrage over public officials who admitted to wearing blackface as part of costumes, chose to bring to market blackface decorator items (which Prada decided to sell) and blackface women’s sweaters. Now it’s Burberry using a noose as a fashion accessory on a “nautical-themed” hoodie. These are among the fashion brands that have decided to seize upon the newsworthiness of racial insensitivity, while demonstrating that they’re insensitive, too.

Capitalizing on hot button social issues is something that the fashion industry has done with astonishing regularity: There has been a ”black woman chair” that appeared on Martin Luther King Day, and moccasins being sold in “nigger-brown.” It was philosopher George Santayana who famously said that “Those who cannot remember the past are condemned to repeat it.” Given previous missteps, some by well-known brands, why are companies seemingly determined to repeat history?

One obvious answer is to get attention. Pushing moral norms will certainly get you noticed. Irish writer Brendan Behan once observed “There is no such thing as bad publicity except if it’s your own obituary.” Perhaps companies such as Gucci and Burberry are abiding by that observation. Nevertheless, one must ask: Why do they seem to employ touchstones of distaste all in the name of publicity? And why do they continue to do it when others before them made the same mistakes? Perhaps all is fair in love and branding. And perhaps those responsible are insensitive to the point of being morally blind.

According to NBC News Riccardo Tisci, Burberry’s chief creative officer, apologized saying in part “While the design was inspired by a nautical theme, I realize that it was insensitive. It was never my intention to upset anyone […] I will make sure that this does not happen again.” A model who was in the show said that beyond the choice to use the noose in the first place, she was further disturbed when staff at the fashion show in which the hoodie appeared “briefly hung one from the ceiling (trying to figure out the knot) and were laughing about it in the dressing room.” The company has since pulled the hoodie from its line.